A booklet published in 1994 by Kathleen Brown, a member of the Chapel, gives useful information. I am also in possession of notes written in 1988, also presumably by a member of the Chapel. I have used both to help put together these notes. Where I use the booklet I have marked this below with the number (1) That Booklet refers to there being an earlier chapel in the village and I have researched this point at some length as will be seen. The most helpful document from this aspect was The Northallerton Record Office Document No. Z 747 Stillington Histories of all Freeholds  (1767 to 1820), that I have marked (2). Finally, a notebook written by G.C.Cowling of Easingwold that can be found in the York Reference Library, gives further detailed information and references to sources. Where used this is marked (3).

One of the earliest preachers was Robert Spence, who was born at Stillington; (Baptised 9th March 1748) his father William Spence was a blacksmith. Robert attended a Dame’s school and trained as a ploughman when he left school. Later he was employed as a groom by Rev. Laurence Sterne but was dismissed when he became a Methodist. He was local preacher for 57 years. (1)

Meeting House on the Green

The earliest document found relating to this building is dated 26th October 1819 and this was a document sworn in the court transferring the building, 12.5 yards long by 10.5 yards wide, from George Walker to the trustees – William Farrer of Marton. Thomas Webster and William Gibson of Stillington, Robert Jackson of Farlington, Thomas Scaife, John Scaife and Charles Thomas Bainbridge etc.(1)

In the absence of knowing where the writer of the Booklet saw this document, I have assumed that it is referring to the chapel in Main Street mentioned in the preceding paragraph. The reason being that both documents mention the name of George Walker as being the owner.

In 1844 a new Chapel was built on this site. It was a very large building capable of holding 400 people, although the average attendance was 45. There were, however, 200 lettable seats realising an income of £7.10s 00d. The Indenture was sworn on 4th April, 1844 and the Trustees nominated were William Turner of Stillington, William Gibson of Crayke, William Barker of Habton (gentleman), Robert Jackson (Yeoman), Robert Farrer (Gentleman) of Stillington, Charles Thomas Bainbridge (Spirit Merchant), Thomas Scaife (Cordwainer), Robert Gill (Gentleman), William Teasdale (Surgeon), and John Driffield (Grocer) of Easingwold. The Minister was Rev. William Ash. Correspondence relating to this time reveals some confusion as the chapel was built on what was two sites -  were two sets of trustees required? After copious correspondence between J.H.Turner of York (solicitor) and the Wesleyan Committee in Manchester the matter was resolved with the exception of whether the land was copyhold or freehold. Finally it was decided that the land was copyhold.(1)

In 1860 permission was given by the Wesleyan Chapel Committee to erect a school at Stillington provided it did not cost more than £100 and that the entire cost would be defrayed in 6 months. A grant was given from the Wesleyan Chapel Fund of £20.(1) This is supported by Cowling who states “There was a school attached to the chapel in 1859." (He quotes his source as being Whellan & Co). In 1890 and 1901 this school was attended by some 50 children. Its capacity in later years was 70. The master in 1890 was James E. Charnock and in 1901 Albert Stafford. (Kelly’s Directories).

In the 1970’s it was decided that the Chapel was far too large and took a lot of heating, it was also in need of repair. After some deliberation it was decided to sell the old chapel and convert the school room into a multi-purpose building. The cost was £3000 and the builder Mr. Lesley Salton. The new chapel was officially opened on Saturday 1st May 1971.(1)

A Primitive Methodist chapel was built in 1866 at the corner of the road junction leading to York on the Easingwold corner.(3)

Charles Hutchinson, a Stillington resident for some years, told me that he could record this as being in use for religious services in 1931 as he went to one or more at that time. (Charles told me this on 30.3.2009). He also went on to tell me that it ceased to be used shortly afterwards and became a cycle repair depot operated by Mr.Morse. During the 1939/45 War it was used to store waste newspapers for the war effort.

The building was pulled down after the 1939-45 War in order to widen the road junction.

This Chapel is not listed in the above Stillington Histories of all Freeholds circa 1767-1820, which tends to confirm that it was not built until after that date. However as far as I can make out from that list the property on the site was owned by William Wilkinson from 1771 to 1819  when it passed to Thomas Wilkinson.

* This building was predated by a private house used for meetings at an unknown location within Stillington.  In 'Archbishop Drummond's Visitation of Yorkshire 1764' it states that a house was licensed  for the meeting of protestant dissenters called Methodists. Not more than 50 people could gather once a month and that there was no regular preacher or teacher 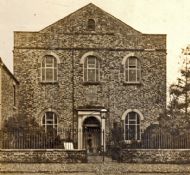 The Old Methodist Chapel in Main Street date unknown.
Pictures of the Wesleyan Chapel are quite rare so we are very lucky to have this small selection.

Celebrations for the Centenary of the Chapel in 1944.
This image shows just what a magnificent building this chapel really was, towering over the neighbouring house.

1971, Harvest Festival
Note the Hall to the right of the picture, this has been converted to form the new Chapel. The existing old Chapel was demolished in 1972 with new houses and flats being built on the site.